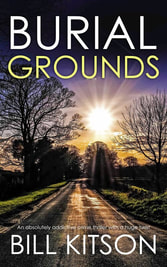 ​
A hit-and-run.  A naked body in the cemetery.  A local woman reported missing.

A pregnant woman is knocked down by a couple in a car. They don’t stop. Nearby, a man films the whole thing. He stands there smiling.

Months later, Detective Mike Nash is called out to the local cemetery. A naked body has been found — a body which definitely shouldn’t be there — placed face down on a grave.
The post-mortem reveals that the victim was restrained with manacles, and then drowned, his body kept upside-down for several days after death.
The dead man was Andrew Derrick. Quiet, well-mannered, he kept himself to himself. Who would want to kill him?
Then a second body, a drug dealer, turns up in the cemetery, killed in the same macabre way.
What connects them?
​DI Nash pieces the clues together . . . and finds himself on the trail of a ruthless killer with a deadly agenda. 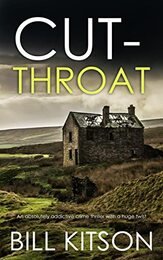 ​A violent murderer has escaped from Felling Prison.

Craig French slit the throats of a husband and wife and stole the luxury watches from their safe. But not before slicing the letter F into their foreheads.

Now he’s on the loose.

But French’s mother says that he wasn’t fit to stand trial — he had amnesia and couldn’t even recognize his own mum.

Mike Nash is not convinced either. But he is certain of one thing: there’s a dangerous killer out there somewhere. And whoever it is must be stopped. 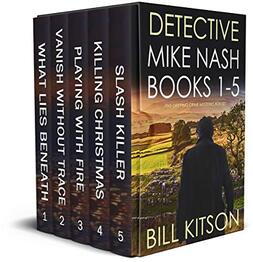 “A great book. A detective who cares in a brilliant, gripping plot.” Pam

“Filled with unexpected twists . . . and a few laughs . . . the reader is kept guessing until the end.” Annie 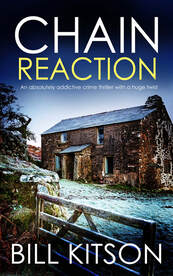 ​Two severed fingers are discovered by workmen at the Boar’s Head hotel. It looks like they’ve been there some time . . .
Detective Mike Nash must find out what grisly goings-on took place at the ivy-clad, upmarket hotel on the Harland Estate.
Are they connected to a spate of brutal muggings in Helmsdale?
​
Then local women start going missing, and the heat is on for Nash and his team.
​
Who is terrorizing this quiet market town? 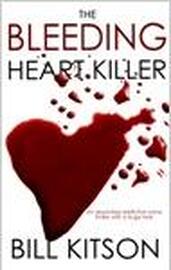 No connection.
​Except their hearts have all been removed!

Detective Mike Nash races against time to find a link between these grisly crimes.
​Who is wreaking a trail of destruction and what do they want to prove? 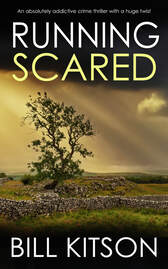 Mike Nash is away on compassionate leave but that doesn’t mean the criminals are going to take a break.
Detective Clara Mironova and the Helmsdale team face a sudden increase in crime. Minor offences ranging from theft, shoplifting, and poaching, pale into insignificance when a violent turf war breaks out between rival drugs gangs.
Soon they have to cope with three murders, including the shooting of a police officer killed on a routine call
. . . now it's personal
Then a batch of deliberately contaminated heroin hits the streets, resulting in the deaths of three addicts and causing media panic.

​Who is the mastermind behind the crimewave? 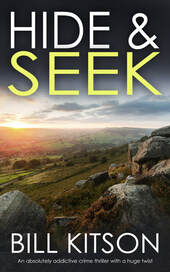 ​Please note this book was originally published as Picture of Innocence

DI Mike Nash stops a thuggish attack on a young landscape painter in Madrid. What’s her secret? And is there a connection with her father’s murder? The artist flees to England where she seeks Nash’s protection.

Nash must unravel the mystery of her past and will find something darker and more evil than even he has encountered before. If he doesn’t stop them, they will find her and destroy her.

YOU CAN HIDE, BUT YOU CAN’T OUTRUN THE PAST 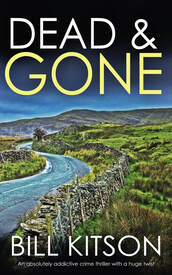 ​Dean Wilson’s sister Linda vanished four years ago, around the same time as millions of pounds of investors' money disappeared from the company she worked for.

When Dean is charged with assault in a nightclub, Detective Mike Nash's enquiries cause him to reopen the fraud case. Dean is in love with a woman whose family were some of the biggest losers from the company’s collapse. Events quickly begin to escalate, and soon Nash has several murder investigations on his hands. Meanwhile Helmsdale police are being swamped with complaints about email scams. Nash needs help. Computer analyst, Tina Silver, is brought in to help. With the body count rising and forensic resources stretched, Nash realizes he may be dealing with fraud of larger proportions than he ever could have imagined. 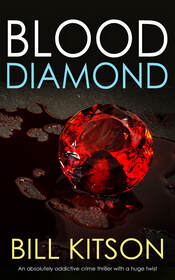 ​1986: A consignment of illicit diamonds en route to London vanishes, along with the couriers. It isn't long before East End gangster Max Perry is found dead, having suffered horrific torture.

Present Day: Max's nephew, Ray, was sentenced to life in prison for the murder. He is released after twenty-five years and heads for Helmsdale, but before he can get there, Ray is the victim of a hit-and-run.
​DI Mike Nash is convinced it was no accident. Then a garage mechanic is found tied up and bludgeoned to death. Nash discovers a link to an unidentified skeleton found years ago in Helmsdale woodland.

How do crimes committed long ago in London connect to the current wave of violence? As the body count rises, the detectives struggle to keep pace with those who would prefer the truth to remain buried in the past. 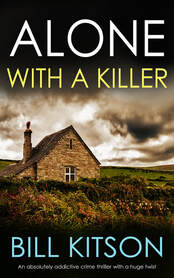 Please note this book was originally published as Identify Crisis

​Alone in an isolated Yorkshire cottage, Vanda Dawson waits for her sister Jo to come and keep her company. Her husband Brian is away on holiday. Outside, as storms lash the country, Jo struggles to reach the house. But she finds it deserted and in darkness.

With Mike Nash on leave, Detective Sergeant Clara Mironova leads the investigation.
The missing woman’s husband is also unaccounted for. Is he responsible, or has she been abducted by the sadistic killer nicknamed The Cremator, a serial killer who tortures and burns his victims alive?

Before Nash's return, a security van disappears along with its two-man crew. Further violent crimes are reported and it becomes apparent that nothing is as it seems . . . and no one is quite what they appear to be. 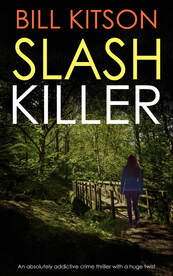 Please note this book was originally published as Back-Slash

​Andrew Myers was wrongly convicted of killing his wife by slashing her throat. Finally freed, but not exonerated, he just wants a quiet life far from where the tragedy happened. He goes to work as a forester on an isolated estate in Yorkshire. But then a killer with the same trademark starts claiming new victims in the area.

Andrew has a terrible chainsaw accident and manages to staunch the bleeding while he drives himself to hospital. His erratic control of his car attracts a policewoman, Lisa Andrews, who stops to help him. But she soon finds out there is more to him than just a hermit-like forester living in the woods.
Is he a callous murderer? Is he now taking a terrible revenge on those who wronged him? Or, does the truth lie elsewhere?

With resources decimated by a flu epidemic, Detective Mike Nash is forced to use unorthodox tactics to expose a web of corruption and deceit spanning the years. 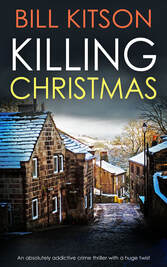 Please note this book was originally published as Altered Egos

​​DETECTIVE MIKE NASH IS GOING TO HAVE A VERY UNMERRY CHRISTMAS.

In an ordinary terraced house, a family die. Poisoned by carbon monoxide.
Then comes a suspicious house fire, with more bodies at the charred scene.
A drug addict is murdered in the most bizarre medieval manner.
And a scientist’s daughter disappears. 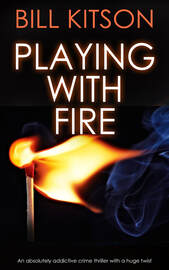 Please note this book was originally published as Minds that Hate

​Gary Vickers killed his lover's daughter. There was overwhelming evidence of his guilt. He is now due for release from prison. Against all advice, he insists on returning to Helmsdale, where Detective Mike Nash must protect him. But Nash has other, more pressing worries . . .
With extremist politicians fanning racial hatred and provoking attacks on migrant workers, Nash has to prevent an explosive situation from boiling over into civil unrest. Nash's small team of detectives has little time to spare for convicted murderer Vickers.

But as Nash becomes acquainted with the facts, doubts start to grow about Vickers' conviction.
Proving him innocent will be difficult enough . . . but keeping him alive until they find the truth may well be impossible.​ 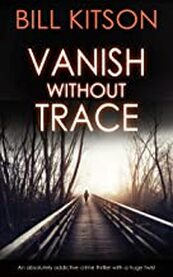 Please note this book was originally published as Chosen

​HOW DO YOU SOLVE A CRIME WHEN THERE'S NO EVIDENCE ONE HAS BEEN COMMITTED?
Sarah Kelly goes for a night out at a club. She leaves around 2 a.m. No one sees her again.

Detective Mike Nash has nothing to go on, until a chance remark causes him to look deeper into other cases. Young women who have vanished without trace.
Nash spots chilling similarities: no bodies, no witnesses, all disappearances explained away.

​He needs to find a solution, and fast, as two more women vanish making it personal and potentially fatal. Both for Nash, and for the women who have disappeared.

Available in AUDIO from 15 February 2022 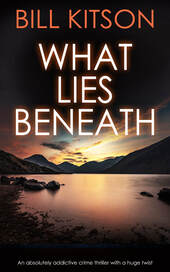 Please note this book was originally published as Depth of Despair

Two skeletons are discovered in Lamentation Tarn, a mountain lake.
Talented detective Mike Nash and his team have little evidence with which to work, until a surprising discovery prompts them to contact law enforcement agencies in Eastern Europe.

A joint task force is formed to uncover a criminal network involved in prostitution, drugs, and human trafficking, but Nash's preoccupation with internal politics, as well as with an attractive Russian detective, proves to be a distraction.

A young victim escapes the gang's clutches, providing Nash with much needed evidence. A search of the neighbouring tarn yields evidence of even more heinous crimes.

Available in AUDIO from 21 December 2021